This week we jump back in time to March 1981, and a pair of shots taken in the centre of Birmingham.

Our two photos today date from mid-March 1981, and are taken in Birmingham, close to the city centre.

The first shows Park Royal bodied Fleetline NOV806G, new to Birmingham in December 1968, and still in the older Blue & cream with kakhi roof, which served as inspiration for the CIE double-deck livery of the 1960s. The destination display is not the most effective in an area where “City” could refer to any one of the three major parts of the conurbation of Birmingham, Wolverhampton and Voventary – especially as the secondary display reads “from City” !!

This bus was, at the time, one of the older vehicles in the fleet, and had been withdrawn by the end of 1983.

The second photo, taken on the same day, shows the new order, with  then fairly new Leyland National AOL17T on the 101 Centrebus service. This National had a long life, being converted to dual-door and used for shuttle work at the International Convention Centre and eventually passing on to a fringe London operator, where it was still active in 2001.

To celebrate the 12th anniversary of the founding of the site, every day during November I’ll be bringing you one of my favourite photos from the past 12 years.

Today’s photo is from 1998, looking at a short-lived double-deck operation in Co. Kerry. 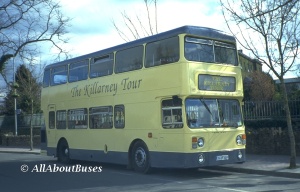 Although the site originally focussed mainly on Dublin Bus and Bus Eireann vehicles, independents were included as and when I came across them. At the time the site started, and up until June 2000, I was living in the UK, so the opportunity for pictures outside Dublin was limited.

Visiting Kerry over the Easter weekend in 1998, I was surprised to come across this independently operated sightseeing tour in Killarney using what looks like an ex West Midlands Fleetline (possibly Roe bodied, though if it is ex-WM it would be more likely to be MCW).

The Killarney Tour operated a couple of trips a day, taking in the town and environs, as well as Muckross and the Gap of Dunloe – a stunning journey in a double-decker, and I was sorry that I didn’t have the time to take a trip on it while I was there.

By the next time I came to Kerry in 1999, the operation had vanished, and I haven’t seen it since.

I wonder what became of the bus – there can’t be that many Kerry-registered double-deckers around?