Having been one of the early routes to go low floor with ALX400 Volvo B7TLs in 2000, the 11 is now set to receive an allocation of new B9TL Wright Geminis. 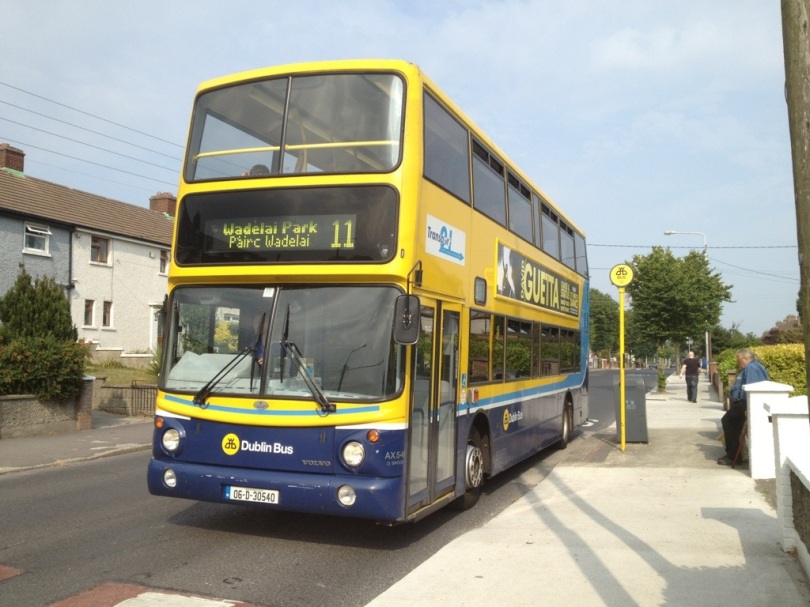 This week we visit the early 1980s, when CIE’s Leyland Atlanteans were looking down at heel 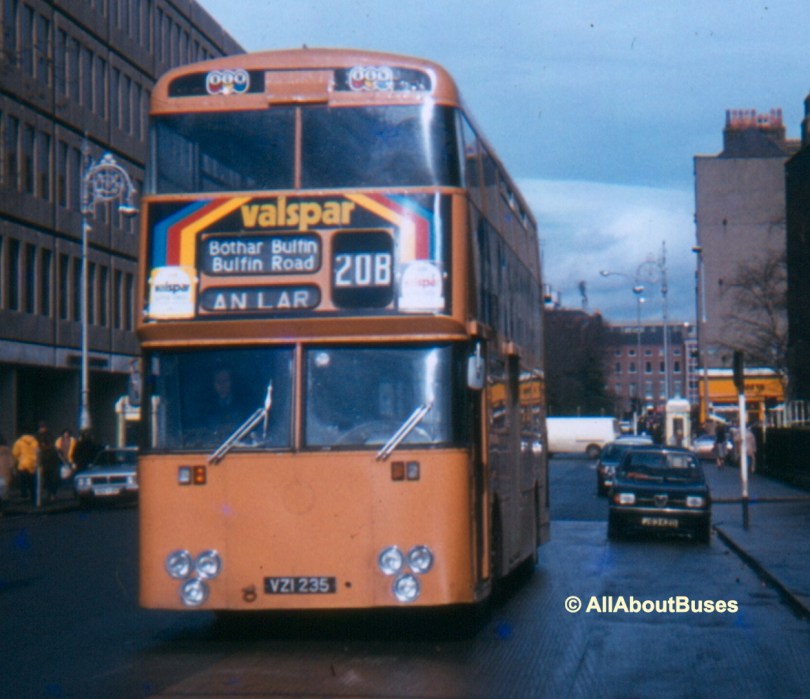 By the early 1980s most of CIE’s 602-strong fleet of PDR1 Atlanteans had been repainted into the drab “tan” or orange livery that the newer VanHool bodied AN68s had arrived in. While undoubtedly more simple and inexpensicve than the previous cream & navy livery, it did nothing for the look of the fleet, and tended to fade rapidly, and show dirt and scuffs much more obviously.

1968 delivery D235 is seen here at Earlsfort Terrace heading south on route 20B, back in the days when the service was cross-city and ran to Bulfin Road on the South/West side, a routing long since abandoned by this route, and now served by the hourly 68A service.

AS a bonus, we have a second classic shot today.  I wouldn’t normally include one as blurred as this, however it is appropriate this week for a very specific reason.

Donnybrook Garage will this week start putting into service a batch of new Volvo B9TL/Wright Gemini buses numbered GT81-100, and this reminds me of the very similar batch of Atlanteans which were at the depot from 1967 to 1983, numbered D81-106.  These buses entered service on the 15/A/B routes in 1967, but moved to the 11 group a few years later, where they stayed for many years, until replacement by Bombardier deckers in 1981/2.  Coincidently, the new GTs, 81-100 are also for the 11 route, one of those rare synchronicities of allocation linking past and present which happen from time to time.

Above we see D81, early in 1980, and having strayed off the 11 and onto the 64A service, another long-vanished operation. Again, the CIE crest is missing from the front, but this bus retains its original fibreglass front panel, more attractive than the plain metal lower front which gradually replaced them as they became damaged.  This bus has the older style blinds, with Irish via points and English final destination in the bottom, though in this case the via points, which translate as Ballsbridge / Mount Merrion, are incorrectly set for the 64, rather than the 64A, which ran via Leeson Street rather than Ballsbridge.

I think the location of this photo is Moorehampton Road in Donnybrook, but I am not certain.

When GT81 enters service in the next few days, I will add a photo here. 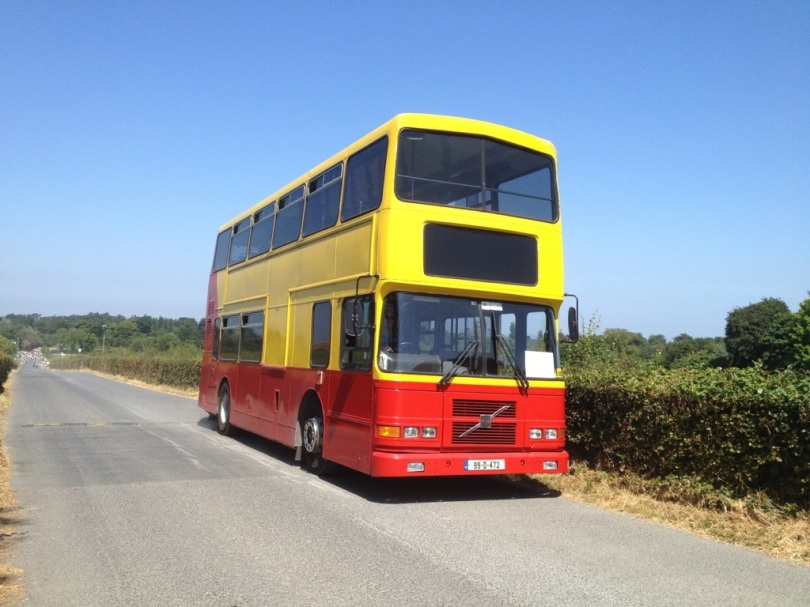 This week’s classic takes us to Bournemouth in 1997, for a bus that is not all it seems . .

Bournemouth, on the south coast of England. Renowned for its sandy beaches, its safe holiday atmosphere, and its large elderly population. Home, in the late 1990s, when this photo was taken, of the municipal fleet of yellow painted buses, operating under the fleet name of . . Yellow Buses.

The buses on either side of our subject are indeed Yellow Buses, in all senses of the word. The fleetname can even be seen on the bus in the background, on the right side of the picture. But the bus in the centre, the brightest, yellowest bus of all, is not a “Yellow Bus”

The fleetname could be generic to any large city, but only the small sticker on the front window gives us a clue that this is actually a London bus, a “red bus” if you will.

This was the era when London Regional Transport allowed the different operators of tendered bus services free reign in terms of livery, and with Grey Green buses on the 24, maroon and cream Routemasters of Kentish Bus on the 19, the the yellow buses of Capital Citybus dominating the east, it looked like the traditional red London bus could become a thing of the past.

Capital Citybus grew out of the the network of London routes won on tender by Ensignbus – they started small with the 145, then they got the 62, then a huge swathe of routes when Hornchurch Garage closed in 1988, and more to follow. Sold off to a Chinese investor, Capital Citybus eventually ended up much later coming into the First Group fold, and until recently formed much of the eastern edge of that group’s London operations.

So it’s a London bus, not a Yellow Bus, but what it it doing in Bournemouth?

A closer look shows it is blinded for the 752 Coastliner Excursion service – express day trips from London to the seaside towns were big business in the years after World War II, and the practice continued right through to the 90s.  So Capital Citybus number 409 is working an excursion, and, therefore, it must be a Sunday.

The bus itself is also interesting, being a representative of a small and almost forgotten type – the Dennis Arrow, the last high-floor double-deck produced by the Guildford manufacturer, and introduced (in 1995) so close to the coming of lowfloor accessible deckers that it never really had time to take off in the marketplace. Less than a hundred Arrows were built between 1996 and 1998, the vast majority went to Capital Citybus, a handful to London & Country, and ones or twos to other operators. This example has Northern Counties bodywork, but many were delivered with bodywork by East Lancs.

Metrobus operate both inside and outside the TFL area, and so their fleet contains both standard London red and their own blue grey livery.

An extensive rail replacement service is in operation this weekend to cover work on the Northern Line tube in London.

Metroline VP541 takes on a good load at Highgate. 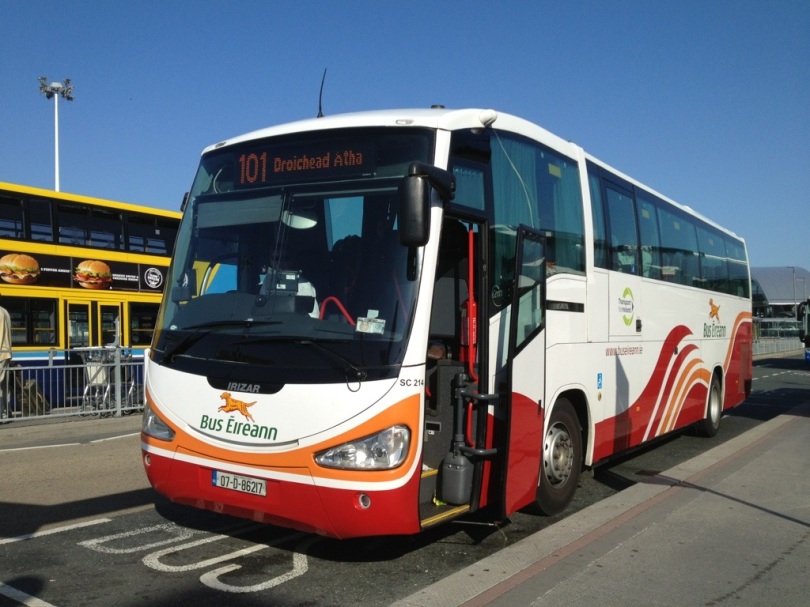 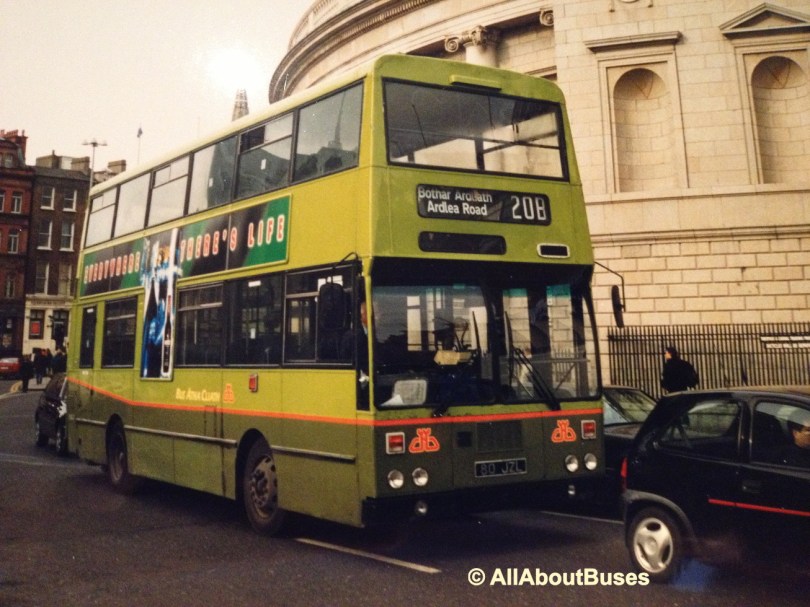 The Bombardier KD-type was the classic Irish double-decker of the 1980s, and radically different from anything that had been in the fleet before, or indeed, since.

Based on an integral design with General Motors Detroit Diesel engine, Allison transmission, and body built in Shannon by Bombardier, then much lesser known in European public transport circles than it is today, 366 of these buses ran on the streets of Dublin, Cork and Limerick (with occasional forays to Waterford and Galway) from May 1981 until December 2000.

KD80, delivered towards the end of 1981, is one of the first batch of Bombardiers allocated to Summerhill Garage, replacing elderly Leyland Titan PD3s dating from 1960, including by chance RA80, which itself had replaced a prewar TD type Titan R80 at the same depot two decades earlier.

KD80 stayed at Summerhill for all of its life, and worked the haevily used Airport routes 41/41A/41B as well as the lengthy 33 and the 20B, with less frequent outings on the cross-city 16/16A, which passed from Atlantean to Olympian operation without ever wholly embracing the KD type.

KD80 was withdrawn in the late 1990s, but Summerhill was to be the last depot to operate Bombardiers in regular service (from its later batches) in December 2000, on routes including the 20B.

There are few full size Optare buses in the Republic of Ireland, but one which is regularly sen in south Co. Dublin is this UK import, owned privately for non PSV work.

With a further 80 new double-deckers due to arrive into the fleet from mid-July 2013, Dublin Bus will be making further inroads into the originally 648 strong fleet of ALX400 bodied Volvo B7TLs.  A handful were sold last year after the final Olympians were culled, but this year will see a cull of more than 60 members of the AV class, being taken from those 00-registered vehicles which have not had LED destination indicators refitted, and retain the older, harder to read dot matrix displays.

Donnybrook will be the first garage to get new buses, so the days are numbered for AV137, see here at the Ticknock terminus of route 114 on Saturday 29th June 2013.

Contrast this picture to that of the terminus of London route 114 a couple of posts earlier – the Dublin version is somewhat more scenic!buses

The Tesco supermarket at Stillorgan Shopping Centre in south Co. Dublin is currently closed for refurbishment, and for the duration of the works a free shuttle bus is being provided to bring customers to the nearest alternative store at Dundrum.

Seen on Friday 13th April, the shuttle is being worked by Eirebus. 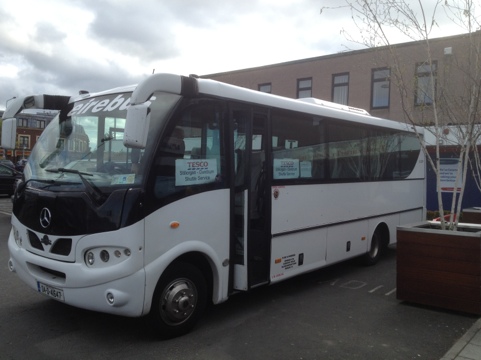 Dublin’s once vast fleet of Volvo Olympians is dwindling rapidly, and the 64 or so still in service represent just 10% of the original Olympian numbers. All are due to be withdrawn this year, in order to reach a promised target of having a fully lowfloor accessible fleet by the end of 2012.

Those remaining are split between Harristown, Summerhill, Donnybrook and Ringsend depots, and can most often be seen on routes such as the 17, 44, some peak-hour 16s and 41s, and as seen here, all-day service on the 15A and 15B routes.

RV603 is seen on a winters evening approaching The Ferryman public house on the south quays.

London’s bus operations kept going for the most part with minimal disruption following a snowfall that saw up to a third if flights cancelled at Heathrow.

Volvo Bus has reported a record year for sales worldwide in 2011, despite difficult market conditions.

Deliveries were up 29%, which means 4200 units delivered in the fourth quarter. Volvo Buses  delivered almost 1000 more units  than the same quarter of 2010, though hard market conditions. Net sales increased by 19% in Q4, mainly due to South America.

During the fourth quarter, the European bus market was at the same low levels as in 2010. In North America, the total bus market remained weak. The city-bus market declined 17% in 2011, when cities’ investments in new buses were very restricted. The coach market in North America increased 25% from an exceptionally low volume in 2010.

The market for heavy buses in China grew 13% in 2011, compared with the year-earlier period.

During the quarter, Volvo Buses signed its largest order ever in Columbia, 688 buses for Bogota. A new bus range, consisting of one city bus and two coaches, was launched in India.

Some pictures from the busgathering at Cultra, uploaded from site by iPhone. 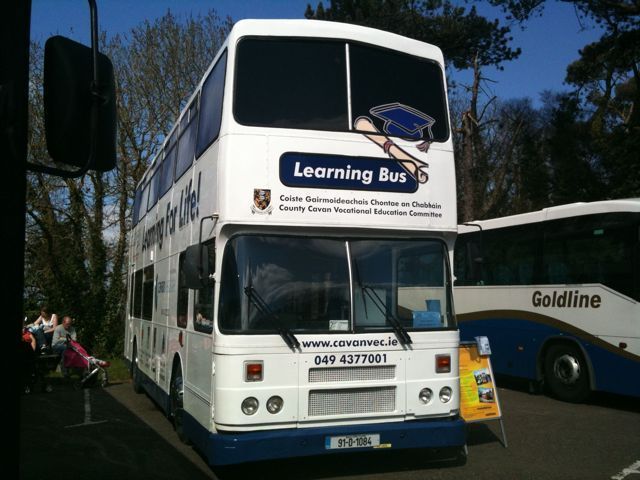 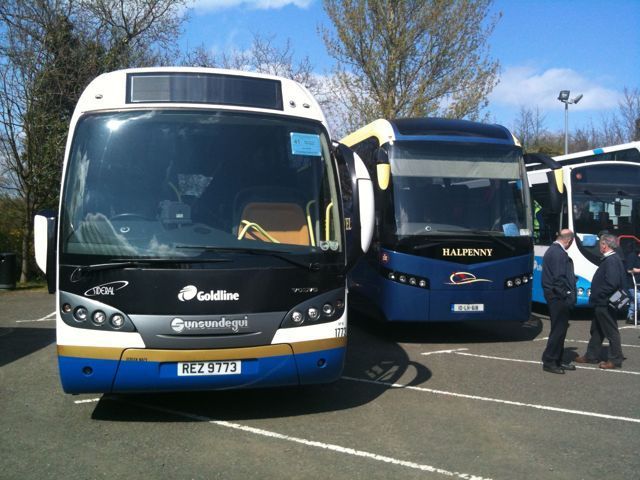 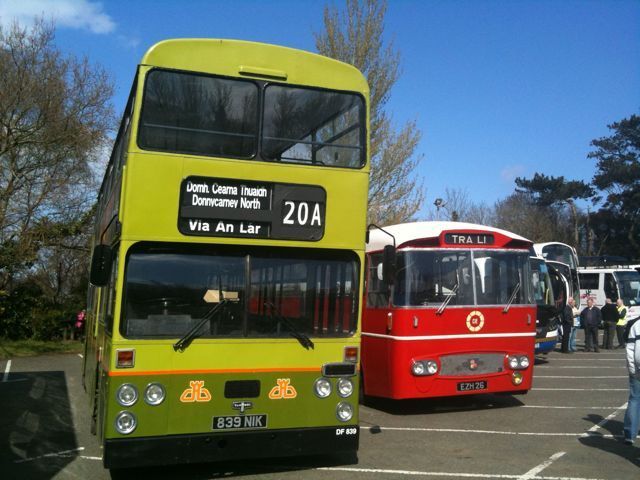