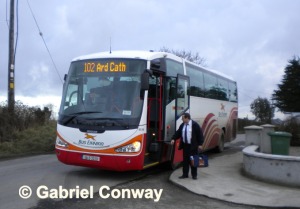 Last Stop - the last bus to Ardcath pauses in the tiny village as the regular driver leaves, and a spare driver prepares to return the bus to headquarters at Broadstone

END OF THE LINE FOR VETERAN SERVICE

The tiny rural village of Ardcath lost its bus service to Dublin at the weekend as phase 1 of Bus Eireann’s cost-cutting plan took effect, eliminating dozens of lightly loaded rural routes around the Republic, and cutting frequencies on others.

The 102 service from Dublin to Garristown and Ardcath, which ran for the last time on Saturday 27th February 2010 was one of the longest running bus routes in the country, dating back to at least the 1920s, and possibly earlier according to locals

Operated after 1945 by CIE’s provincial department (which later became Bus Eireann) the service was at one time so popular that on Saturdays a double-decker from the Dublin City Services fleet (later Dublin Bus) would cover the route as far as Oldtown. This practice continued until the early 1980s.

In recent years passenger numbers declined drastically as car use increased, to the point that when the final journey operated on Feb 27th, the sole passengers for the entire trip were CBW reporter Gabriel Conway and a transport historian from north Co. Dublin.

The driver for the last trip had been marked in on the route for the past 7 months, since the previous driver “Paddy” had retired after 35 years service. Normally the bus is outstationed in the area, so an extra driver was brought on the trip to allow SC202 to be returned to Broadstone.