Progress continues on the extension of the Green LUAS line from Sandyford to Cherrywood.

Major structures have been in place for at least 18 months, and most tracklaying was done in 2009, but now work is progressing on the overhead electric wiring.  The photos below show the wiring in place at the “Bride’s Glen” stop, in Cherrywood Science & Technology Park, and were taken on Saturday 20th February 2010.

A note: Somewhat confusingly, the “Cherrywood” stop will be in the Tullyvale residential area, while the last stop, actually in the Cherrywood campus, is “Bride’s Glen”.

Much work remains to be done, and I’d estimate empty testing to take place from summer, with an October/November opening date for the line. 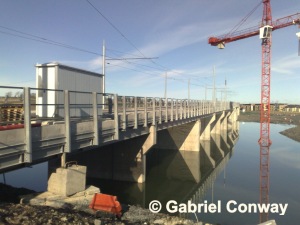 One thought on “More progress on Cherrywood LUAS”