To celebrate the 12th anniversary of the founding of the site, every day during November I’ll be bringing you one of my favourite photos from the past 12 years.

To see these pictures in all their glory, click on the picture for the full-size version.

KD182 spent its final days on the Blarney route.

The end of the Bombardier’General Motors double-decks saw the end of double-deck operation in Cork, after more than 60 years (though the decker is now making a return to the city).

I’m trying to remember if it was the end of 1996 or 1997 that the majority of the Cork KDs were withdrawn, but in any case, two remained in service for another few months after all the others had gone. The very last was KD184, but it is the second-last we are looking at here, with photos taken of KD182 in its last week on the road, when it was still proving useful to shift the heavy crowds on the Blarney run.

Staff at Capwell told me they pleaded with the Dublin-based management to be allowed to retain double-deckers for routes such as this one, but to no avail. 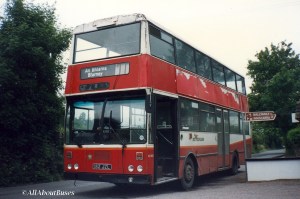 At the outer terminus. KD182 is looking a bit worse for wear at the end of its life.

The KCs which took over the route showed some signs of wear. A driver watches as KC148 sets off for Blarney.

One thought on “ONE IN TWELVE – Old and full of Blarney”